I am excited to announce that Wild City will be appearing in a few locations across Victoria and South Australia in the next few months. I hope you can make it to an exhibition or workshop! Wild City is a collaborative sculpture presented in exhibition as a thriving, green metropolis that considers wild animals as citizens in a mini urban landscape. In the arts based workshops, children are invited to create new habitats and infrastructure that welcome wild animals into the built environment. These ideas become part of the collaborative sculpture for exhibition. 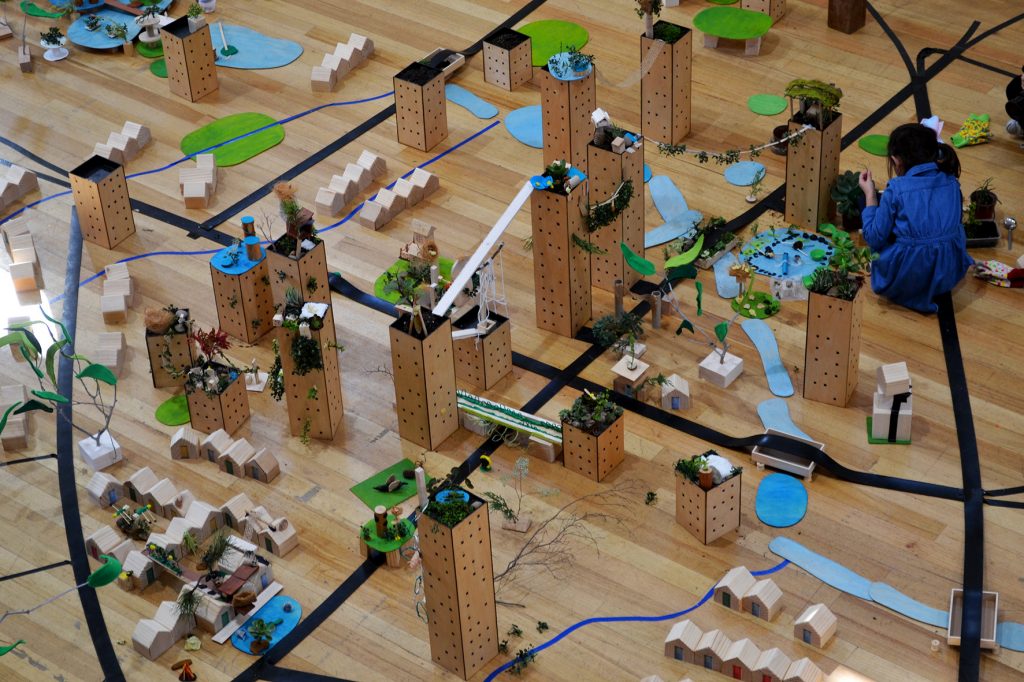 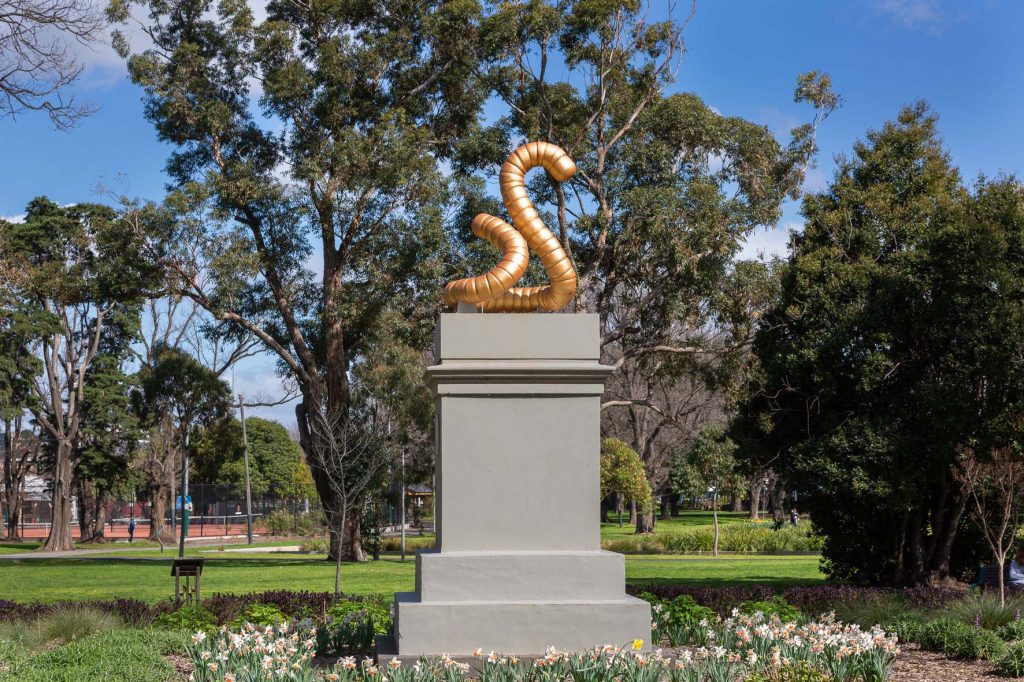 A plinth is an historical site for the revered, those we are told to remember and admire. The playful juxtaposition between this cultural structure of the plinth and the placement of the humble earthworm—raised up on a pedestal and represented on a momentous scale—is humorous and yet deeply meaningful. Silently in darkness the earthworm has been going about its business, doing the important and under-rated work of turning decaying matter into nutrients for plants. It is one of the hardest working and most unrecognised members of our biotic community. Their burrows bring water and air deep into the ground providing the right conditions for root growth, creating the healthy soil that we all depend on. I believe it is time that we honoured this unsung hero, and  raise the earthworm up onto the plinth. It is a reminder of our dependence on ecological cycles, the importance of composting our green waste and to think about the lifecycles of the matter that we consume.

The offical launch and Worm Party was held on the 20th of October 2019. The Gould League held a free worm composting session and information stall on the day, and lots of other worm activities. I have included Dr Tessa Laird’s speech below, along with my own. Here are links to interviews.

IN PRAISE OF THE WORM

Before launching into my words on worms, it seems especially appropriate when talking about soil, and earth, to acknowledge that we are gathering on Wurundjeri land today. I pay my respects to elders past, present, and emerging, who have always, and will continue, to care for the land. Like myself and my settler-colonist ancestors, the majority of worms found in gardens and worm farms are not native. There are over 1000 species of native worms in Australia and approximately 80 introduced species, and all of them are beneficial for soil.

While today we are here to celebrate the humble garden earth worm for the duties it performs in eating our waste and fertilising our food, let’s not forget we are also on the continent that has some of the largest native worms in the world. For example, the Giant Earthworm of Gippsland apparently can grow to 4 metres long! While the Squirter Earthworm of coastal New South Wales, which is half a metre long, will squirt jets of fluid if disturbed!

Worms are, literally, foundational creatures, in fact, as the great book says, “In the beginning, there was the worm!” Well, OK, in this instance, the “great book” in question is not the Bible, but a book by the French Philosopher Jacques Derrida called The Animal That Therefore I Am. Of course, Derrida’s having fun, making a pun out of a holy text. But he’s also got a more serious agenda. He’s trying to figure out how we human animals understand and relate to non-human animals, and he’s asking us, in the very roundabout and convoluted way of a French philosopher, to re-examine our preconceptions and prejudices about the animal kingdom.

Charles Darwin would agree with Derrida’s phrase, as he too thought that the entire history of the world, would not have been possible without worms. In fact, he also wrote a great book, the very last thing he ever wrote, entirely about worms, called “The Formation of Vegetable Mould: Through the Action of Worms, with Observations on Their Habits”. (This was before the days of best sellers with snappy titles). This book was the summation of 40 years of experiments, in which Darwin played bassoon to his worms, chewed tobacco and breathed upon them, waved perfumes at them, and fed them all number of things, finding for example that they preferred wild cherry leaves and carrot tops to cabbage and celery. He was convinced that worms possess “a mind of some kind”, and that they even display individual character traits.

Long before Darwin was around, someone else realised how important worms were to soil fertility, and therefore, to life itself. In Ancient Egypt, none other than Cleopatra decreed that the earthworm should be revered and protected as a sacred animal. Anyone caught removing worms from the land could be put to death! I wonder if we should reserve the same punishment for anyone caught desecrating this statue? Although, apparently this statue did attract some graffiti – not the worm itself, but the plinth. Someone painted the phrase “Worm is God”, and I think the unlikely trio of Cleopatra, Charles Darwin and Jacques Derrida would all agree!

Derrida made his pun by substituting word for worm, and worms do worm their way into language. You probably know that Vermicelli means little worm-like noodles, but did you know that the colour vermillion comes from the Latin vermiculus meaning “a little worm” in reference to the cochineal insect from which crimson dyes were obtained. Sadly, the word “vermin” is also derived from the Latin word for worm – and that should give you some indication as to how they have been perceived. In those times, snakes were also called worms, and generally anything creeping or ground-dwelling was regarded with suspicion. My favourite theorist, Donna Haraway, wrote a recent book in which she celebrates the “tentacular” that is, anything that wriggles, and anything that is low-down and dirty, in the muddy, muddled, thick of it all. This, she says, is where the real thinking takes place. She has a bumper sticker that reads “Composting is so Hot!”

Like Haraway, I think Kathy’s work is so important, because it turns our expectations upside down, and challenges us to see the world differently. I’ve followed Kathy’s practice for a while now, and I first started taking notice of her when she made an installation of hundreds of hand-made flying foxes in the Atrium at Federation Square. Flying Foxes, like worms, do great things for the environment, yet people either ignore them, or complain about them. They are even called pests, even though they are native and endangered. Like worms, flying foxes call for an upside-down view of the world, because they hang from trees, and fly at night. With the Unsung Hero, Kathy takes what is usually under the plinth, and puts it ontop, a carnivalesque reversal which gives the spotlight to that which is usually hidden, and where we have to pay respects to that which we take for granted.

Worms are magicians, they are alchemists who turn our waste, our food scraps into black gold. Worms not only allow us to continue to feed ourselves, they create topsoil which stops erosion, and also sequesters carbon from the atmosphere. Worms are our allies on this heating planet, and we need to combat global warming with global worming – more worms, most compost, more gardens, more veggies, and, most crucially, more respect! This sculpture is a wonderful reminder to pay our respects to the land upon which we stand, and to all the custodians of that land.

As an artist I really respond to place. There is always a rich humus of earthly and cultural history there. And so we have this plinth, in a historical garden. A manicured and rather uptight early colonial design, one might say, that is deeply loved by myself and the community. A place where we take can our shoes off and touch the earth in this urban setting. With ancient soils holding the memories of footprints of Wurundjeri meeting places by the Merri Merri. The plinth elevates, it is a well recognised art historic place, for marble statues of those deemed worthy of honouring and remembering in public places. This plinth was dedicated to royalty, our queen …(in an interesting twist, she was stolen).

Meanwhile, the earthworm quietly and in darkness has been going about its business, doing the important and largely unrecognised work of creating healthy soil,. Nourishing and aerating the thin crust of earth that covers our namesake planet, and that all land based life needs to thrive. Soil or earth is a complex living entity.

Perhaps it is worth contemplating the graffiti artists claim, that as worms make good soil, they MAKE the earth, that they EARTH CREATORS, that ‘worm IS god’. And as the great thinker Darwin said “It may be doubted that there are many other animals that have played so important a part in the history of the world as these lowly organised creatures”.

Permaculture has long recognised the worm and uses the it as a symbol for one of their principles: ‘produce no waste’. Permaculture’s philosophy is to ‘work with’ circular systems and to try and turn problems into solutions.

Landfill, depleted soil, and moisture are a bit of a problem here in Australia. It is worth noting that around 25% of landfill is green waste (which without oxygenation puts methane gases into our already damaged atmosphere). This green waste can instead be composted or worm composted into nourishment for our soil. A lecturer I had in Utrecht said, “Art can be a force for change, but you must critique with proposition”. Composting our green waste back into the earth is an easy solution … so this is my friendly proposition.

It is easy to feel overwhelmed with issues we face on our warming earth and frustrated with our leadership team. The founder of Permaculture David Holmgren said that worm composting can be one form of positive protest, to recalibrate our reliance on the systems of linear economies and instead return to a circular economy (or I like like to think of them as circular ecologies). Circular systems are things like: the amazing transformation a worm performs turning decomposing green waste, organic matter or if you want to get really radical, poop, into compost that helps grow plants that provide food, with the waste returning to the earth to continue the cyclic and sustainable system. This can be adopted on grand scales, with good thinkers and doers like Charles Massey explaining regenerative agriculture. It is at this point that I‘d like to repeat Dr Tessa Laird’s great mantra in saying “we need to combat global warming with global worming”.

This artwork on a plinth, in our garden, is a recognition of the hardworking worm and a reminder of how, through partnerships with this underground critter and its like, and by becoming active aware agents of our earth’s cyclic systems, we can wriggle forward on a damaged earth.

Start a relationship with a worm, and in the risk of sounding like a worm zealot… start on the path of working with the ‘earth creators’.

It was time that we put the worm on a plinth. It is time to value the worm as one of the hardest working members of our community. Improving the soil structure and nutrition as an essential part of the biological cycle of matter that earthly beings depend on. It is time to honour this unsung hero. Thankyou earthworms.